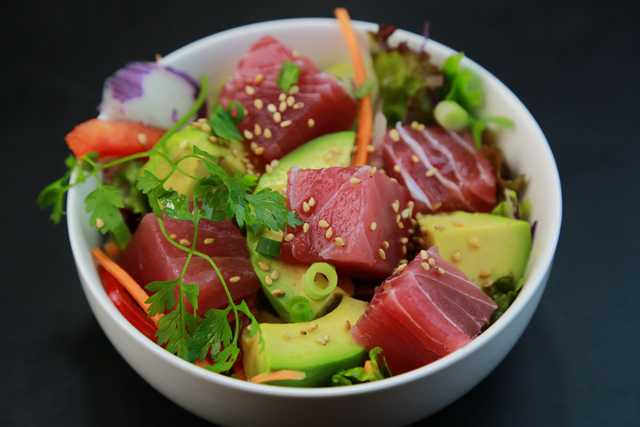 With changing trends in the US restaurant worldPoké is emerging as the new replacement for Sushi. Traditionally pronounced as Po-Kay, this dish has made its way everywhere from the USA beaches, gas stations, surf shacks, local stores and beyond.

Poké is the Hawaiian version of Japanese sashimi (raw fish), usually served on rice or varieties thereof, and as a starter to a traditional Hawaiian meal

This Hawaiian classic, has now been ‘Americanized.It is now casual, comes in plastic, china cups or bowls, and consumed either on the go or wherever one can find a seat. From Los Angeles to Charleston and Brooklyn, this new quick food category is growing fast!

What makes this raw fish the new choice of all demographics?

The answer lies within the new consumer, YOU! Because you all love to eat something that tastes great, easy to carry, affordable, and of course that can help you stay fit and lean,even on a budget. It is your choice to select from the variety of dish, vegetables, sauces, and toppings. Poké is 100% customizable with whatever you love to eat.

It is said that no gathering in Hawaii would be complete without a few bowls of poke, [sometimes also honored as the soul food of Hawaii]. And raw fish lovers in the US are adopting it as their own.

Its popularity is becoming as broad as its many flavors!

The Next Idea, [International Restaurant Consulting Group], have already predicted California is in the midst of Poke-insanity. With multiple fast casual brands now serving Poke as their signature products, this food trend is actually in its infancy.

Brandwise – Sweetfinis perhaps the most well known Poke concepts in California, generating further headlines from their recent investment by famed restaurateur, Danny Myers. However there are many more up and coming brands and the Poketrend is literally exploding. Indeed, Private equity group Global Retail Capital, are rumored to be creating their own Poke Fusion concept.

The name ‘Poke” means “to slice or cut” in Hawaiian / Tagalog. Poké is basically a raw fish salad, similar to a tartar, however it is typically less acidic. The dish was originally a simple preparation of raw fish with Inamona, fish salt, local seaweeds and kukui nuts. However, nowrestaurants are offering a fusion of flavors, marinated in soy sauce and sesame oil then tossed with onions and a variety of other ingredients – actually it’s a limitless choice.

If ever uncertain about the best ingredient to choose for a better taste, then ask for it with avocado, macadamia nuts. Adding some sriracha or crushed red pepper flakes to give it a spicy kiss can equally be great choice. Poke can be combined with a bed of rice to create a tekka-don bowl of sorts.

The idea of eating a bowl of healthy snacks as a meal is definitely a food trend right now and Poké stands on top when qualifying healthy foods.

Poké is affordable to its quick serve competitors and is easily available at $8 – 10 per bowl, which is far cheaper than its closest competitor – Sushi.

Why it’s becoming the mainstream in USA…?

Poke has now gained popularity across the entire United States of America,essentially because it is easy to carry, easy to prepare, hassle-free,healthy, andalso offers great price flexibility and customization.

Poke is both cooked and raw and cold and hot. It resembles a beautifully crafted Chipotle burrito bowl. It’s both a comfort food and a healthy meal.

As a bonus, the American Heart Association has stated that eating fish at least two times a week significantly helps you avoid the cardiovascular disease. Let me tell you the secret what not many people know about Poké salad. It is very low in fat, and the protein levels are relatively higher than the starch rich roots like potato, yams, and cassava.

After researching the benefits that accompany a Poké bowl, The Next Idea Restaurant Consulting Group predicts it to be the next major trend in Fast Casual and Retail Food. Robert Ancill, CEO of The Next Idea, confirms that his firm has more Poke concepts under development than any other category, and franchise/licensing enquiries are now almost daily. In his words: “Poke is definitely The Next Idea! and we plan to take it to the next level of success by adding elevated spice profiles and seasonings for enhanced  taste and health benefits,” he says. One can only imagine!

For Information on Poke concept development and Franchising, contact The Next Idea, www.tniinternational.com, www.thenextidea.net or simply ring at +01-8188877714 or send an email on info@thenextidea.net