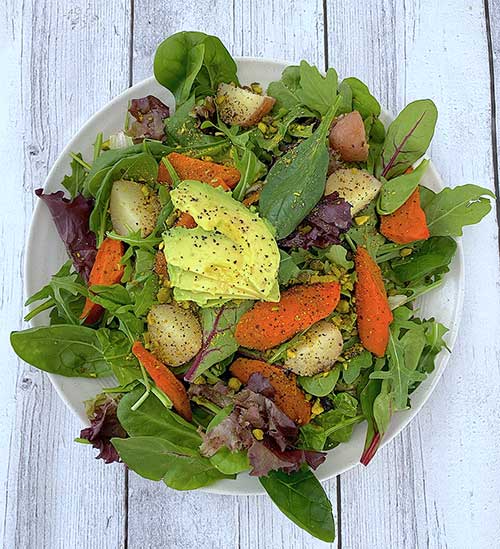 Consider this: since 2012 to 2020,meat-free meal sales in supermarkets have increased by over 1,100 percent.That’s quite a growth curve for any sector, let alone a category that has literally emerged from dirt.

At a group level, virtually all food types have vegan alternatives.

Meat substitute is possibly the largest category now, led by the Beyond and Impossible brands, along with Amy’s Kitchen, Archer Daniels Midland, and the Blue Chip Group.

The global meat substitutes market was estimated at around $1.6 billion in 2019 with projected revenue to reach $ 3.5 billion by 2026 and CAGR [compound annual growth rate] of 12.0% during the same forecast. The vegan market is primarily driven by the increasing demand for plant-based meat products among Millennials and Generation Z, however, all generations have an interest in this new category given the broad appeal and underlying reasons behind this sectors’ emergence.

The other major vegan growth category is dairy, where brands are adopting plant-based commodities including, but not limited to, almonds, soy, oats, hemp, coconut, rice, flax, and cashew. The big players in this category include Perfect Day, Freedom Foods Group, International Holdings Inc. and Hain Celestial, however some of the corporate mainstream dairy groups are fast making their way into this market.Danone, for example, has expanded its plant-based range to include Silk Almond Milk Yogurt and So Delicious CoconutMilk Yogurt, along with soon-to-launch Activia Dairy-Free yogurt alternatives.

Needless to say, virtually all of the broad based food brands are meeting new consumer demand by innovating and providing new plant-based food alternatives, all of which are now resting on an increasing square footage of supermarket shelves.

It’s not just food and beverage that is converting to plant-based products; cosmetics, furniture, clothing,and even construction materialsall have taken a strong position.For example, Thrive Cosmetics only offers 100% vegan cosmetics and the clothing industry is littered with vegan apparel brands including:In The Soulshine, Wuxly and Beyond Skin. In construction, hemp is the alternative material of choice, and is being deployed as finish and structural materials used in residential and commercial buildings.

So, what is driving this new plant lifestyle? The diehard vegans of this world would have us believe it’s due to the human race waking up to the realities of animal cruelty. However, while that is certainly a factor, the human race has definitely not, all of a sudden, grown a conscience.

As with most mega trends, and vegan food is a MEGA trend, it is the sum of all things that have created the new decades’ mostdynamiccommercial food opportunity since… well, since meat!

Understanding the trend is critical, as it is the source(s) that determines if the trend will fade away or become normality.

By way of example, the titanicpoke craze of 2012 to 2018 was driven byconsumer’s increasing interest in raw fish. Southern California was unsurprisingly the epicenter for the US’s poke trend given its weather and lead in raw fish consumption.

Poke protagonistshypedthe Hawaiian dish representing perfect foundational economics of fast-casual dining through its easy customization and convenience in a bowl. This, combined withlow start-up costs, and the portability of the productresulted in multiple brands springing up.

However, poke has its problems; it’s just not as reliable and versatile as sushi (its closest rival), and *supermarkets have been unable to offer a shelf stable product. As such,poke revenue and market share arerelatively stagnant despite the category’s continued innovation. While there have been a few poke success stories, many of the brands that sprung up have subsequently sprung down.

On evaluation, the poke phenomena was based on some broad perception which has withered and the product category,at street level,has somewhat faded off the ‘on trend’ radar.

* Given that broader availability drives a product into mainstream markets, supermarkets are the primary driver in sustaining food service category trends. Think pizza, burgers and hot dogs. The extensive availability across retail and food service is the chief incubator that maintains relevance of each category.

So back to my question of what is compelling the vegan cyclone?Well, as indicated, there is greater awareness about animal cruelty.Certainly,the Millennial andGen Z generations are far more aware and more sensitive towards animals, thus generational attitude transformations relating to food have shifted towards plant-based products. However,in the scheme of things, this represents a relatively small percentage with multiple other factors to consider.

First and foremost is the environment. As climate deniers keep chanting ‘conspiracy’ to a mainly diminishing and uninterested audience, general populations watch in awe as states and even continents burn out of control.Drought and flooding havebecome more prominent, and general weather patterns are distinctlyaltered from historic norms, all exactly as scientists predicted, only sooner than anyone expected.

This extraordinary development has fueled interest in plant-based diets given their more planet friendly science. Consumers are now acutely aware that, in general, plants grow faster than cows (by a lot!), requiring less water and space to cultivate.Combined with a 10 times fasterreplacement speed than livestock, the environmental and economic advantages that plant-based foods hold over farm animals, in the food chain, are really very obvious.

As global populations are on the rise, so are farms, and I mean literally on the rise. Vertical farming using hydroponic, aquaponic, and aeroponic technology has proved to be highly efficient in producing more food per square foot, and is thus able to supply more humans with essential foods than traditional livestock farms.

Unremarkably, it isconsiderably more costly and obfuscated to create vertical cattle or sheep farms, thus investment in modern plant-based agriculture is outweighing livestock investment. The vertical farming market was valued at $2.3 billion in 2018 and investments grew significantly from $60 million in 2015 & 2016 to $414 million in 2017 & 2018. While still very small in the context of overall plant farming, the investment growth is notable.

On average, 2nd generation vertical farms yield 55 times more produce per square foot over conventional farms. In addition, food can now be grown in the cities where it is eaten. The concept of a restaurant located in a major city having its own farm in the parking lot is now a reality and, given the farm will be producing plants and not meat, menu development will be based on available ingredients which are of course, vegan.

Looking into the future, a natural cycle will slowlyemerge whereby the change in food supply will influence shifts in food class demand towards processed and non-processed plant-based products. This is where the market becomes interesting as consumers gradually migrate to veganism through the supply chain, and not necessarily through choice or even a trend.

This takes us to the vegan influence driver: global population growth. The world population increased from 1 billion in 1800 to 7.8 billion in February 2020.It is forecasted to reach 9.7billion by 2050. Currently over 1 billion people live in chronic hunger, mainly due to poverty and limited access to water and food sources. If we remain within the current global food supply system, starvation will propagate intensely, causing untold systemic regression.

However, one of the palpable solutions is by deploying agriculture away from feeding livestock todirectly feed humans. It is estimated that humans could net up to 3 quadrillion calories a year, a 50% rise from our present amount, if we switch to a plant-based diet. Consider the power of newly developed mobile vertical farms in extreme climatic and remote parts of the world, which could travel to areas of need and are self-sustaining.Again,such technology would need to be plant-based and diets would simply adapt to the new food resource.

Ofcourse,health concerns are the next reason for the shift to plant-based diets. Plant-based diets can defend against heart diseaseand protect against a broad range of different medical conditions.As such, plant-based diets are becoming increasingly popular in the United States. A 2017 report found that 6 percent of people in the U.S. now identify as vegancompared with just 1 percent in 2014.

Thelma Ancill, CEO of Phood Farmacy, an online ghost kitchen providing from-scratchFood as Medicine, reports that around 30% of sales are vegan, and she has observed a notable rise in plant-based demand in the past 12 months.

However, the U.S. lags behind whentrading animal protein for plant protein. In Germany, almost half of the population follow a low-meat dietand other European countries are following suit.

Yet,not all plant food is healthy. Many of the large meat replacement brands have high sodium levels, a health villain if ever there was one, and some other rather questionableingredients.Many meat analog products are breaded or fried in unhealthy oils and contain hard to understand ingredients such aspea protein isolate, expeller-pressed canola oil, refined coconut oil, yeast extract, maltodextrin, natural flavors, gum arabic, and so it goes on. Equally processed vegan products often contain soy, which has been accused of infertility, cancers, and so on.

Researchers from Brazil, the Netherlands,and the U.S. all presented at a major conference calledNutrition 2018.Theydemonstrated benefits associated with vegetarian and plant-type diets, but they also communicated the health importance of the food quality.

Which leads me to the final factor in the plant-based diet expansion.It’s really quite simple, plant-based products actually taste like, and are promoted like, meat!

Take one of the US’s most promising vegan fast food chain concepts, Plant Power Fast Food (based in Southern California). Their menu includes a Bacon Cheeseburger, a Chicken Wrap, BBQ Chicken Salad and Raw Tacos. These items sound like products from I’m Lovin It or Taco Swell Bell, however,all Plant Power products are 100% veganand frankly taste great. Plant Power is just one example amongst many. However, 15 years ago, the likelihood of a 100% plant-based fast food chain being successful was simply out of the question. It’s not just dedicated vegan groups that are offering tasty vegan products; Carl’s Junior, Taco Bell, and yes, McDonald’sall now have a plant-based product on their menu.

In the supermarkets,shelves are now filled with a broad range of plant-based products that are promoted as meat substitutes. Buffalo chicken strips, taco meat, and meatballs are now all available as meat substitutes, and sales are ‘Beyond’ expectations! Most restaurants carry plant-based options on their menu and chefs continue to experiment with meat replacement ingredients in all restaurant sectors.

In closing, will we all be vegan by 2030? I don’t think so, but there is no question that the world’s food ecosystem will transform over the next ten years at an unprecedented rate and a colossalswing towards plant-based diets will be the foundation of the plant diet insurgency.

About the author: Robert Ancill is a Food & Restaurant Consultant who specializes in food and restaurant trends as well as design, positioning, and marketing. Robert advises large and small corporations on hidden trends and market specific trend forecasts.

For information contact Robert directly at: robert@thenextidea.net or call: 818 887 7714